Yesterday I picked a fight with a steeplechase barrier. At least my right knee did. I lost, of course. That’s the problem with driving your knee at full speed into an immoveable wooden object – you’re never going to come off well. What is with with us at knee injuries at the moment (See Michael Kallenberg).

Everything was going well until that fateful moment. It was a glorious day for running; light winds, warm. Training had gone well this week. It would have been impossible to predict what time I was capable of running until I got out there though. Warming up was good, hurdling smooth. Then the call room – a few pre-race nerves never hurt. After all, it had been a while since I’d been in a call room. I was ready though.

The gun went. Smooth around the first lap. 67/68. Felt great. First water barrier – nailed it. Suddenly I was in the front of the pack though, not quite the pre-race plan. Ah well, I’m here now, lets hold the pace. Feel good, feel good. I talk to myself constantly when I’m running. Often as runners we talk about the ‘zone’ when everything switches off and you’re just flowing. I was there, but very much concious of my thoughts. They’re really simply half-second thoughts as I run around. “Spot the barrier, stride, stride, over.” We came through the first kilometer – 2.54 i think. I didn’t quite hear the shout. Super smooth. Still talking to myself – stay smooth, stay relaxed. 4 laps to go. Another at this pace and then push on. I felt good, confident, controlled.

“Hold the pace. Barrier. Left leg lead this time”. THUD. The trail leg hit the barrier and there was only going to be one outcome. I hit the floor like a sack of bricks as the gasp rang around the spectators. My knee searing in pain I had a split-second decision to make – get up and carry on running or stay down. I stayed down, I knew I’d hit my knee pretty hard and didn’t know the extent of the damage. I ran 3 miles on mildly torn plantar a couple of years ago and ended up out for months. Plus, it hurt like hell to even try bending my knee. I’d waited 2 years to get back on the track, and in the blink of an eye my comeback race was over.

After a while i picked myself up. Luckily i could walk, the adrenaline was still pumping. Of course the first thing James says to me is “what happened to sitting in?” I was whisked straight back into the warm up area and into the Welsh Athletics physio area for some cold compression treatment using Squid and to get my wound seen to. It seemed I’d taken a bit of the track with me too as i hit the deck. As normal I can’t say a bad word about the WA medical team though – Adam did a sterling job. (Don’t I look a happy chap there). 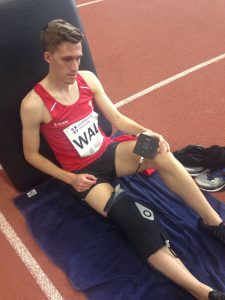 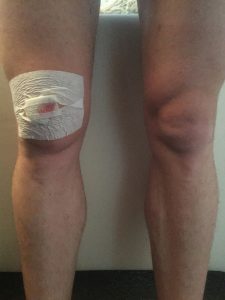 By all accounts it’s not that bad. My knee took a bad knock but I should recover quickly and be back running (hopefully) in a couple of days ready to get after it again this weekend. Unlike some injuries, that are just freak, this was completely my own fault. I didn’t get the trail leg high enough to make the clearance. It’s an occupational hazard and one I chose. I just need to jump more barriers. I’ve never failed to clear one before and fingers crossed I won’t again!

Until next time my advice is not to pick a fight with steeplechase barrier. You’ll lose, every time.