The title of this blog is both metaphorical and literal. It also sums up the past few months extremely well.

For those of you that have read my previous blogs, you’ll know that in my first track race of the year my trail leg collided pretty hard with an immovable object (steeplechase barrier) which sheared my quad quite substantially. The news that I’d torn my quad was devastating, especially after spending the whole of last summer injured too. I didn’t want to become one of those athletes that was chronically injured, never being able to reach their true potential because they couldn’t stay healthy. Even if this was a freak accident that has nothing to do with overtraining, or incorrect footwear or the other common causes of running injuries.

I spent a couple of months on the Elliptigo, trying desperately to stay in the best shape I could but knowing full well I wasn’t getting the same quality as big workouts with the Team Thie guys, feeling a couple of kg extra pile onto the body. I was determined to salvage something from the season though, and with a few weeks left before track races disappeared once again for the year I found myself standing on the start line of a 3000m. A BAL League in Nottingham. I was determined to run this race for myself and for the club – after all, a match win would mean promotion back to Division 1 for Cardiff AAC. This was also to be the tester – how was my body? Was I actually in any sort of shape to run 1 steeplechase race this year?

As it turns out, the answer was yes. Was I race fit? Absolutely not, and my body definitely had some toughening up to do, but the laps ticked by and the lungs burned. 2nd place. 8.18. Not terrible.

So it was agreed that I would toe the line in front of the barriers once again, in the Welsh vest once more too! The Manchester International was a perfect race for me really because it was a 2000m Steeplechase, meaning that although I wasn’t in P.B shape I could tough it out and maybe hang in for a good time. The main issue was that I hadn’t jumped a barrier since the news broke that my quad was torn. That meant I had 1 week to get a couple of hurdle sessions in and get the confidence and technique back as best I could.

My first session over hurdles was pretty shocking, i felt off-balance and every hurdle was a fight. But it was a trial by fire and I needed it. The next session was pretty simple, a couple of 200’s over REAL barriers, just something smooth a few days out from the race. There was just one small problem, I was absolutely petrified.

I’m not normally someone that gets nervous. When it comes to races I really thrive off the excitement, and I enjoy racing so much that I have learned to control pre-race nerves and turn them into positive energy. This was different though, facing the ominous wooden barrier that only a few months ago had ended my season. So I ran the session, but really struggled to hurdle on my weaker leg, to force that left leg out in front. My confidence was well and truly shot, stuttering into barriers to make sure i was leading with my strong right leg, foregoing any chance that I would collide with the barrier once again. I left the session that weekend unsure over my steeplechase future. I had no idea if I would be able to bring myself back around by the race in 3 days time and be confident on both legs. 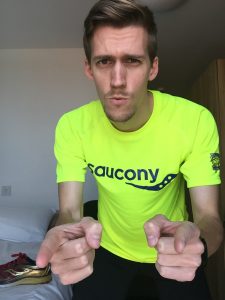 The nerves from the past session had stayed with me today, all through the warm up – extra hurdles to practice, forcing the left leg over first, no stuttering.

By the time they called us to our marks I was back on. All the nerves and fear were gone, it was just another race, and I had some barriers to clear on the way to the finish line.

All-in-all the race went pretty much as well as I could have expected it to. It wasn’t spectacular, in fact I would have hoped to have run a few seconds quicker, but I got round in one piece and had no fear hurdling with my weak leg. It was a very positive day.

Unfortunately that was to be my last track race of the season, as I opted to run the Welsh 5k Championships a few days later, rather than put the body on the line once again, especially given how unsure I was over my form. It wasn’t worth the risk. I ended up winning the Welsh Champs by 30 seconds and retaining the title I won in 2015.

The moral of the story here, at least from my perspective, is that you should never be afraid to admit when you are fearful. That self-recognition helps you define how to reduce the fear, and in my case it literally meant getting over the barrier that stood in my way. 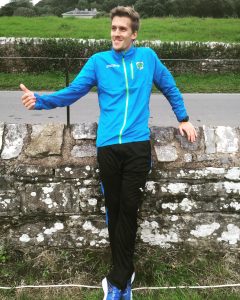 To watch the above mentioned race, follow this link to Vinco Sport: http://www.runjumpthrow.com/videos/19764