Less than two weeks ago I found myself dosing in and out of sleep following surgery on my leg. Initially I was due to be operated on on the Monday, however it was pushed back to ‘sometime Tuesday’. Tuesday morning the surgeon inspected the leg and upon its unveiling it was evident that the infection was moving at an alarming pace as my leg had started to turn green. Needless to say, I was in for surgery within 10minutes. After the operation I did attempt to ask a few questions whilst in recovery but I was so out of it I could have been asking anything from ‘was the surgery a success’ to ‘what’s your favourite football team?’ I definitely couldn’t remember the responses anyway and I knew I wouldn’t be seeing the surgeon again until the next morning. So, for some time I sat there debating what was going to happen next. ‘Could I compete at London’, ‘Will I be running again in the next few months’, ‘What happens if they can’t stop the infection.’

These thoughts didn’t last for too long though as I was blessed with many visitors, from Hannah’s grandparents who had to cope with my dopeyness, to Mick and Sandra who were a constant source of support and positivity visiting every night, to my Auntie Emma, Lee, Charlotte and Adam who made sure I was stocked up on books, dvd’s and most importantly chocolate/biscuits. Added to that I was inundated with messages of support (and some well deserved abuse) from family (particularly my poor dad who was panicking and was gutted for me at the prospect of missing London) friends, the RAF and team thie.

Wednesday morning the surgeon told me that they wouldn’t be checking the wound until the following day but I should be prepared to go in for a second procedure. After another sleepless night that was the last thing I wanted to hear. Later that afternoon the dermatologist visited with results from swabs taken on the Monday and during the surgery. It turned out that the infection was moving faster than they thought again. I was stuck on IV antibiotics pretty much non stop from that point. The worrying part was that every nurse I spoke to kept asking if I understood why they had ramped up my antibiotics, as If there was something I hadn’t been told.Thursday morning brought the moment of truth. I didn’t know what to expect but still hadn’t given up on the idea of running London although many people told me I should most definitely rule it out. Fortunately it turned out that the infection had started to clear up which meant I could go home. The hole in the leg was pretty substantial though and the surgeon told me it would take 6-8 weeks to rise to the surface and would be a few months until it completely healed. As for London, it was unlikely I’d be ready for it. I should avoid running/training for the next few days and then see how I get on. Before I knew it I was then on my way, rattling around with a bag full of medication.

By the Monday the wound had risen at an unbelievable rate and looked so much better than we could have imagined. I felt ready to try a run but had to make sure the wound was wrapped up well. I headed out towards Bute Park for 4 miles and to my amazement felt ok as I knocked out 5.40’s. As soon as I turned around though I noticed my dressing was coming off so it was a long walk/shuffle back with a big smile on my face. From there the week continued to improve as I managed a couple of steady 10milers, and 8 miler and an easy 6. 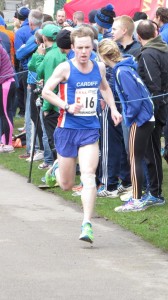 Saturday brought the 12 stage relays. I had decided to do a long leg as a test. I decided that if the knee didn’t feel ok doing this then I would have to rule out London. Setting off on leg 5 I felt great for the first mile and then my hamstring started to tighten due to tubigrip I was wearing. That combined with the shock to the system made for a very hard run. I found myself crossing the line feeling disappointed with a long leg time of 27.49. It was after moaning to James though and receiving a simple response of ‘this time last week you were f###ed’ I was taken back to my thoughts in the hospital. Less than two weeks prior to the relays I was wondering when I’d next even run let alone race. Now I can look ahead to the London Marathon and I didn’t think I’d be saying that. I’ll be going into the race with the same attitude I had always planned to enter the race with. I’ll be setting out hard and chasing a pb but at the same time I’ll be soaking up the atmosphere every second of the way round. Look out for me on the start line…I’ll be stood in the RAF vest wearing the biggest smile.

A big thanks to the staff at the hospital. They were fantastic. I didn’t fully appreciate the circumstances in which they have to work under. There are a lot of people out there who like to moan about the NHS but I for one think we’re lucky to have such a great health service.

Thanks again for reading, I’ll see some of you around London